On Wednesday, August 24, 2022, Dr. John Anthony Soto, Sr., left this earth to be with Our Lord at the age of 77. He was born in Toledo, Ohio, on August 2, 1945, and made San Antonio his home for the past 26 years. He was preceded in death by his parents, Prudencio Soto and Pauline Rincon Soto, and his brother, Michael Soto. He is survived by his wife, Rebecca Gallegos Soto, and his sons Matthew Gallegos and wife Roslyn, John Anthony Soto, Jr. and wife Jennifer, David Joaquin Soto and wife Chelsea, brothers Charles Soto, David Soto, Raymond Soto and wife Christine, Steven Soto, Joseph Martin Soto, and sister, Marianne Soto Martinez, and husband Thomas, and his grandchildren Sierra Olivia Soto, John Anthony Soto, III, Samantha Octavia Soto, Jackson Avery Soto, Beatrix Isadora Soto, Joules Josephine Soto, as well as numerous nieces, nephews, and loving in-laws.
Dr. Soto graduated from the University of Toledo in 1971 with a Bachelor of Education. At the University of Michigan, he received his Master of Social Work in 1971 and a Doctor of Philosophy in Education in 1974. His vast academic knowledge impacted many throughout his career.
Dr. Soto had a passion for serving others he enjoyed interacting with students and serving as a mentor during his time at the University of Texas in Austin, the University of Denver, Wayland Baptist University San Antonio, and Our Lady of the Lake University (OLLU) in San Antonio. He especially enjoyed his role as Associate Professor and Director of the Baccalaureate Program for the School of Social Work at OLLU. As a Hispanic Serving Institution, he valued the opportunity OLLU provided him to teach, coach, and mentor Hispanic students that came from similar backgrounds as himself.
He continued serving others throughout his career, serving as Mental Health Director for Servicios de la Raza Mental Health Clinic in Denver, Mental Health Coordinator for the State of Colorado, and Executive Director for the Mayor s Office of Employment and Training under then Mayor Federico Pe a for the City and County of Denver. Dr. Soto also served as Deputy Director for the Puerto Rico Federal Affairs Administration in Washington, D.C. under Governor Pedro Rosello. Upon his return to San Antonio, Dr. Soto accepted a position with the Alamo Community College District (ACCD) as the Director of Business Outreach under Dr. Federico Zaragoza. He was a pivotal part in the creation and opening of the ACCD Westside Education and Training Center alongside other members of the Blue-Ribbon Committee. Upon his retirement from ACCD, he continued to serve others in his role as Superintendent of his nonprofit drop-out recovery program, The Learning Academy of San Antonio (formerly Academy of Achievement @ SA), which he began in partnership with his wife, Rebecca. To date, the program has helped over 4,000 students graduate with a valid high school diploma so they may pursue higher education, training, employment, or employment advancement.
Dr. Soto considered his biggest accomplishment being a dad and a loving, devoted husband. He would beam with pride when speaking about his sons and openly showered his wife with his love. He was the oldest of 8 children, helping to raise them at 15 years old after his mother passed. His love for his brothers and sister was palpable. He also loved his friends and gained many over the years; earning their admiration and respect through his humility, kindness, and genuineness. He was an intellectual and shared his intellect with everyone in hopes that he could somehow be an inspiration. Even within the in-laws he started what he referred to as the Inteligencia Group where the family would discuss everything and anything from serious to silly. He loved to use the phrase how’s come and the family would tease him about that, which he referred to as a Toledo hometown colloquialism. He told stories and LOVED baseball. He played baseball for years until he hurt his knee in his mid-thirties. He was a die-hard Detroit Tiger fan but always wore a NY Yankee cap. He loved his alma-mater, University of Michigan, and spoke of his time there with reverence. He also loved his high school, Central Catholic in Toledo, and stayed connected with many of his high school classmates. He grew up in the Catholic church, serving as altar boy throughout his youth and his faith never wavered.
Dr. John Anthony Soto, Sr. is now at rest after achieving meaningful acts on earth. He fulfilled his calling and met his earthly responsibilities with great dedication and pride, and now he has gone home. Heaven will be a little brighter upon receiving him. We thank God for having shared him with us. 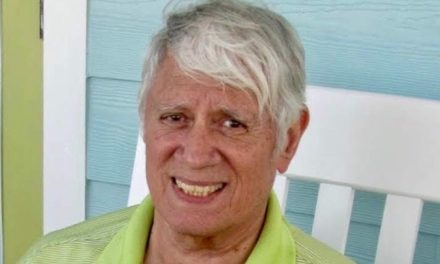