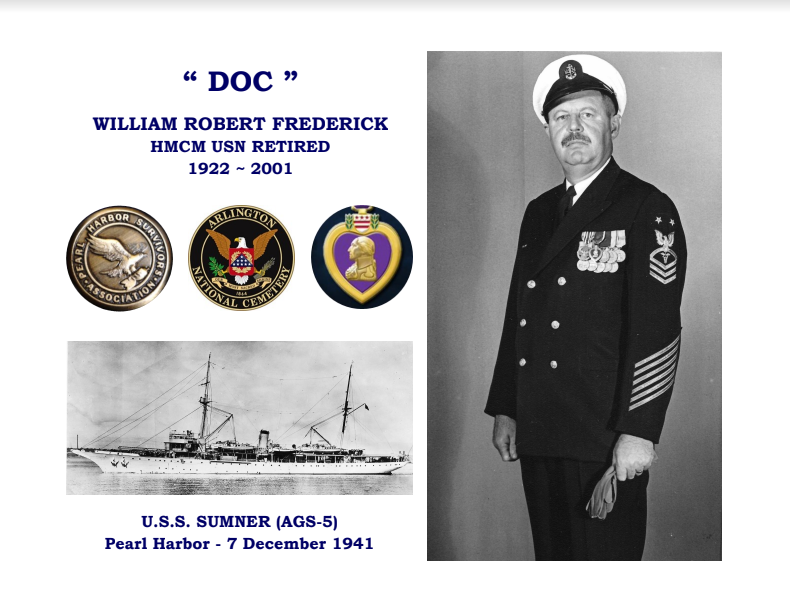 William Robert Frederick was a 17-year-old Pennsylvania country boy when he enlisted in the US Navy in 1939 and became a hospital corpsman, which could be described as the equivalent of today’s physician’s assistant.
He departed the USA aboard the USS Sumner, a hydrographic survey ship on April 1, 1941. It was a happy time for this young man full of wanderlust as they sailed through the Caribbean with island stops, passing through the Panama Canal and ultimately pulling into Pearl Harbor in late November. Dad’s letters home told of his love of the sea, comradery among shipmates and girls met while on liberty in exotic foreign ports. He fully expected to be home on leave by Christmas.
The horrors of war began for that starry-eyed young sailor on December 7, 1941 with the totally unexpected well-executed attack of terror by a country with which we were not at war. The war was in Europe, not in the romanticized peaceful tropical islands of the Pacific Ocean.
The deafening sound of bombs from frightful low flying aircraft, black smoke, toxic fumes, munitions exploding, the screeching of sirens blaring, the harrowing screams of human beings on fire immediately ended his innocence.
His name became “Doc”.
Attached to the 2nd Marine Division, my father went ashore where his medical skills were most needed during some of the worst battles of the war. Skilled in tending to the wounded and saving lives, he also watched men die – men he personally could not save – all while under fire and trying himself to survive. All corpsmen and medics scrubbed off the identifying red crosses from their helmets – a favorite target of Japanese sharpshooters.
When wounded at the battle of Tarawa with shrapnel embedded in his left leg at the knee, he became his own surgeon, removed the shrapnel, stitched himself up and went back to work. That wound haunted him for the rest of his life as a reminder of the horrors of war and the importance of living in the moment while loving and caring for the people around him.
My father continued to honorably serve in the United States Navy for thirty years, including in the Korean War and in Southeast Asia during Vietnam. He rose to the rank of Master Chief and when he retired it was no surprise that he was teaching and training younger sailors how to become Navy Corpsmen.